After over 1200 miles on the road, made it to La Crosse, WI on the banks of the Mississippi.  All has gone well; no mechanical issues, the old body has held up and the young one has done nothing eventful – all in all a good trip so far.  Lunch at the Blue Iguana in LaClaire, IA – nice Mexican place..  Saw some other old farts heading to the Rally.  Judging by the age of the participants, doesn’t appear that anything crazy will happen there.

We managed to get off the 4-lane highway for the last couple of hundred miles and having great fun on the mini-twisties…  Should make it to St. Paul tomorrow am and can dig into the BMW culture – we’ll see how long that lasts…  Might be a short stay… 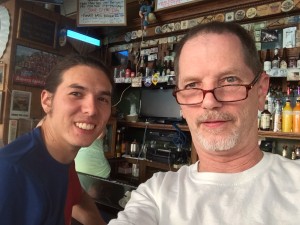 Found a nice brew pup in La Crosse – Bodega Brew Pup – great beer and food.  Not the best portrait of the 2 of us, but my arms were not long enough to get the whole scene.

Now ready to crash after 12 hrs on the road.  We did get stung by the time change – planning off by an hour. So, to bed early and off to St. Paul early tomorrow.